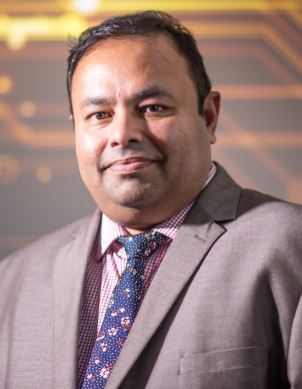 Professor Ravinesh Deo leads UniSQ's Advanced Data Analytics Research Lab and is listed in Top 1% of world scientists as a Highly Cited Researcher by Clarivate/Institute for Scientific Information (ISI)™ Web of Science Citation Index. His credentials have been recognized by Elsevier and Stanford University as among the top 2% of scientists worldwide. As reflected in the publication of frequently cited papers, Prof Deo is recognized as one of the most influential scholars in Australia and internationally. In addition to Artificial Intelligence (AI) and Machine Learning (ML), he specializes in data engineering, deep learning, evolutionary and nature-inspired computational intelligence, optimisation methods, and big data in renewable energy and power engineering, radio communications systems, defence and national intelligence, the Internet of Space Things, probability modeling, risk analytics, and engineering. With a PhD in Turbulence and Energy (Signal Processing) and a BSc in Physics & Mathematics awarded with a Gold Medal, Professor Deo's research focuses on explainable and interpretable artificial intelligence and machine learning, which are applied widely in the fields of electricity and power systems, renewable energy, radio communications, and engineering. As a result of his work, he was awarded the Excellence in Research Award, Ronel Erwee Memorial Award for Excellence in Postgraduate Supervision, Faculty Research Excellence, University & School Publication Awards, and the HES Faculty Teaching Excellence Commendation. Educated in Fiji (at Labasa College, one of the highest performing schools in Fiji), Prof. Deo graduated as Senior Secondary School National Dux. He holds a PhD from Adelaide University, a Master of Science from the University of Canterbury, and a Bachelor of Science from the University of the South Pacific. He is a Program Director and a Senior Member of the IEEE. Professor Deo is an Associate Editor for Engineering Applications of Artificial Intelligence, IEEE Access, Stochastic Environmental Research and Risk Assessment, and Remote Sensing. Aside from providing academic mentorship, Prof Deo has strong connections with Australian businesses, such as CS Energy, Australian Bureau of Statistics, Queensland Government, Defence Department, CSIRO, and Senetas. In addition, Prof Deo has been awarded competitive fellowships, including the Advance Queensland Smithsonian Fellowship, the Young Scientist Exchange, the Japan Society for Promotion of Sciences (JSPS), the Australia-India Strategic Fellowship, and the Australia Endeavour Fellowship. In addition to reviewing ARC, NISRG, and other competitive funding, Prof. Deo has been an invited expert on editorial boards for Elsevier, Springer, and IGI, and has examined more than 50 doctoral and master's theses internationally. Prof. Deo has supervised more than 30 PhD and Master students (16 PhDs), with 7 PhD students receiving awards for excellence in doctoral research. His PhD and Masters students have received funding from the Australian Government DFAT totaling $1.4 million. Prof Deo secured over A$16.1 Million collaborative projects from many sources including a recent Office of National Intelligence and Department of Defence funding (~$500,000), Queensland Government, ARC (DP & LP), CRC and other Federal Departments. Throughout his career, he has co-authored over 270 publications with more than 395 scientists both domestically and internationally. As a result of his publications being cited over 11,700 times, he has a h index of 61 (Scopus 55) and a SciVal Field-Weighted Citation Index 3.0 which places him among the top cited researchers globally, and specifically in countries such as Japan, Spain, the United States, the United Kingdom, India, and Australia.